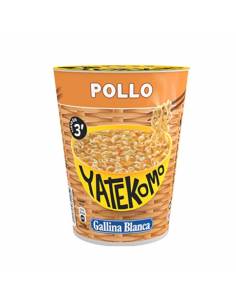 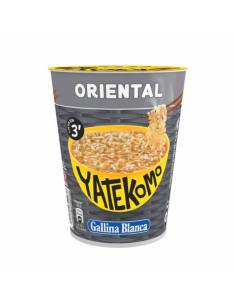 7.6
0,950 €
Sale of Yatekomo Oriental 61g Gallina Blanca, food preparation with wheat flour noodles and spices with an oriental flavor, ready in 3 minutes, from the Gallina Blanca brand, for vending and impulse vending machines. Pack of 8 units. Wholesalers of processed food.

We are wholesale distributors of Gallina Blanca products for vending machines. We distribute to professionals of the vending sector, tobacconists and impulse.

We always work with product in stock and ready to be shipped. Most of our orders are delivered within 24 hours.

Founded in 1937, in the middle of the Spanish Civil War, with the name Gallina de Oro, from its headquarters in Barcelona's Paseo de Gracia, it produced a new and revolutionary product in the sector: concentrated bouillon cubes, composed of one and a half ounces of Argentinean meat and a varied extract of vegetables; the production was carried out in a traditional way.

Gallina Blanca then decided to expand its product range, taking advantage of its position in a market with little competition. The very old and well-known Gallina Blanca soups, dehydrated products, easy to prepare, which are still sold today, stand out.

In 1954 the company's most famous product was introduced: Avecrem broth, whose growing demand, together with its soups, led the company to move its industrial facilities to a new location.

After forty years growing as a company in the domestic market, in 1979 it decided to expand its activity to the foreign market, being present in more than 70 countries in Europe, Central Asia, America and Africa.

Currently, Gallina Blanca markets a wide range of products: broths, soups, ready meals, pasta, soft drinks and desserts, being one of the most important companies in this sector.

In addition, Gallina Blanca is included in the Forum of Renowned Spanish Brands, thanks to its outstanding image in the countries where it is present.

Among the products of this great company we highlight some of the best known, such as: